By Anami Montesorri on March 5, 2014 in Parents’ Notes and Perspectives, The Messenger – Anami’s Newsletter

Editor’s note:  This article was originally written in 2011 at the end of Chloe’s three-year primary cycle.

It’s Saturday morning, and I’m home with my five-year-old daughter.  I observe her as she writes a story about mermaids.  Later in the day, she reads a book about sharks and is engaged by herself for an hour or so.  Afterward, she enthusiastically tells me everything that she has learned about this subject that has captured her attention.  Her enthusiasm reaches its climax when she informs me that she will become a marine biologist when she is older.  In the late afternoon, we walk to a nearby playground where she attempts, again and again, to cross a set of spinning monkey bars – she wants to do it without any help.  She has no fear of falling down; she revels in each attempt. 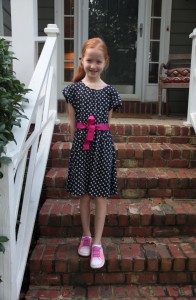 My wife, Erin, and I first visited Anami Montessori School in the spring of 2007 as we sought out an alternative to the “traditional” education experience for our daughter, Chloe.  Neither of us had been educated in a Montessori environment, but we had friends with children in Montessori schools.  Their enthusiasm for the educational model was quite persuasive, if not contagious!  We learned about Montessori’s orientation toward helping each child develop into a self-confident, independent, cooperative, competent and happy person.  We heard about “self-directed, purposeful activities” which naturally encourage the child’s innate joy for learning and yet take place in a collaborative environment.  All of this was compelling, as was the list of Montessori graduates – people like Katherine Graham (former owner/editor of Washington Post), Prince William and Prince Harry (Royal Family) Larry Page and Sergey Brin (co-founders of Google), Jeff Bezos (founder of Amazon.com), and countless artists/entertainers like Sean Combs and Dakota Fanning—whose example captivated our imagination and offered evidence to support our friends’ enthusiasm.

I’ll admit that I had my doubts about whether any school could accomplish such lofty objectives and outcomes.  Even as we made our decision to send Chloe to Anami, I shared this lingering doubt with Erin:  “If Montessori can truly accomplish this, why aren’t more parents sending their children to Montessori schools?”  This question continues to vex me, particularly now that I have witnessed the promise of Montessori education coming true for Chloe.

I have no definitive, AMI-approved answer to offer, but my experience as a Montessori parent has given me a better understanding of why a parent may resist sending their child to a Montessori school.  The reality is, if one hasn’t been educated in a Montessori environment or otherwise exposed to children who demonstrate the beneficial outcomes of a Montessori education, the act of “buying in” is a total leap of faith.  In my experience, the challenge of being a Montessori parent is that it requires a healthy dose of patience and a willingness to trust the process.

Early in our journey at Anami, we attended our first Parent Evening with Rita Wallace, who would be Chloe’s teacher for her three years in the primary program (Children’s House I).  Rita introduced several Montessori concepts to the parents that evening and emphasized, in particular, the concept of the “prepared environment.”  She described the deliberate set up of the classroom—simple and orderly—and the interconnected nature of the various materials in the room.  Rita explained how Montessori education revolves around the view that the child can decide for herself what to work on at school because she instinctively knows what work she should focus on.  For this idea to work in practice, Rita explained, there must be an environment in which the child can engage with materials which attract the child and are appropriate for the child’s needs at that time in her development.  Rita’s explained that part of her role is to provide the child with lessons on the materials and to determine the timing of these lessons based on her observance of the child’s unique needs and interests. 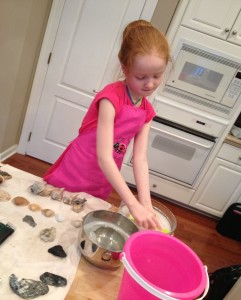 A few months later, I came to observe Chloe’s classroom and watched with fascination as the children had the freedom to move about the classroom and choose their work.  The flow of the children engaging in their work—sometimes independently, sometimes in a group—and the quiet way Rita and her assistant guided this struck me as akin to observing the performance of a symphony by an orchestra.  I couldn’t think of a single example in my traditional school experience where this sort of free-flowing, productive and joyful environment existed.  (Free-flowing and joyful?  Sure, we had recess, but I’m not sure how “productive” we were! )  Yet, even with this demonstration, I still felt anxious about this approach to Chloe’s education, particularly during periods where certain academic benchmarks were seemingly not being addressed.  For example, I wondered why we should allow Chloe to read a book and misread or mispronounce words.  Answer:  because she is choosing to read!  If I corrected her, I risked extinguishing the flame of her enthusiasm for reading.  It took numerous conversations with Joan, Rita, parents of other Anami students and our resident expert (Erin), to help me keep my focus on the big picture and find the patience to allow the process to unfold.  “Wait until Chloe is in her third year of primary, and you’ll see how she will put it all together,” Rita promised.

I realized that what I really wanted was to know how to participate in Chloe’s education.  During a subsequent Parent Evening, I became aware of an essential ingredient which ultimately unlocked my “success” as a Montessori parent.  Rita returned to the topic of the prepared environment and discussed another key element to this environment:  the parent.  Rita explained that becoming a part of the prepared environment as a parent involves an active form of cooperation with the Montessori educational process.   Because of my lack of experience and understanding with Montessori education, this meant that I needed to be teachable and willing to set aside certain conceptions about education that were rooted in my own traditional school experiences.

So Erin and I practiced cooperation and patience during Chloe’s years in primary.  In the months that followed, our preparation as parents took on various forms.  We continued to learn about the Montessori educational process which helped us understand (and appreciate) the various activities Chloe engaged in at school.  The better we understood Montessori education, the more we could be a part of Chloe’s prepared environment.  Our trust in the “process” strengthened as a result so that we didn’t panic at the first sign of a “mistake” made by Chloe and, instead, could focus on fanning the flame of her enthusiasm.

The reward has been the opportunity to see Chloe truly blossom into a confident person who is a joyful learner.  It is a process.  It’s also a promise.  During Chloe’s third year of primary, Rita’s promise to me came true as I experienced true astonishment at Chloe’s development—body, mind and spirit—and gratitude for the journey we are on with Montessori and Anami.

A short update from 2013:  Our engagement with the Montessori process continues today with Chloe now in her third year of the elementary program, and we continue to find our lives enriched by this process.  Though her process and activities have evolved, Chloe’s authentic and joyful persona still comes shining through.  She challenges herself physically and accepts that falling down is part of how she learns. She still loves marine species, reads voraciously about them and explores ways to engage with them.  She still loves mermaids and imagines being one, resulting in several entertaining stories that she has written.

One unexpected gift that resulted from our willingness to “trust the process” is that, along the way, we realized how Chloe had become our teacher.  What a magical thing that is!  She is a patient teacher, repeating a lesson over and over again in our classroom of life until we can master it on our own: that each day offers us the opportunity to revel in the attempt, and that our mistakes are a part of learning and should be celebrated as such.