By Anami Montesorri on March 4, 2014 in The Messenger – Anami’s Newsletter

By Ariana Klotz  (aka Ariana Shahinfar)

Ariana Klotz (a.k.a. Ariana Shahinfar, Ph.D.) is a full-time mom to Mase (fourth year elementary child) and Meredith (extended day, Children’s House I), and a part-time developmental psychologist. She serves as an adjunct faculty member in the department of psychology at UNC-Charlotte.

On a recent sunny afternoon, I had the pleasure of sharing lunch with Matthew Kanode—one of the remarkable graduates from Anami’s first class of students, now a GIS (Geographic Information System) specialist for the Colorado Division of Parks and Wildlife. Truth be told, I never left Charlotte to share lunch with Matt.  But the picture he painted of both his memories of Anami and his favorite lunch spot—a bench overlooking the majestic Rocky Mountains—made me feel as if I was right there with him as we spoke during his lunch hour. Here is his story:

Matt first met his teacher, Joan, when he was a bright-eyed, first-year elementary student 27 years ago. After graduating from Anami six years later, Matt moved briefly to Phoenix, Arizona, and then returned to Charlotte where he completed public middle school and attended Independence High School in East Charlotte (which he remembers with a chuckle as “Big I”) as an International Baccalaureate student. He then went on to Appalachian State University, where he earned his Bachelor’s degree in Geography/GIS.

Following graduation, Matt lived and worked in various parts of the hurricane-prone Southeast, using GIS as a tool to help disaster-relief efforts locate where to deliver aid and temporary housing in areas where there were no longer roads, house numbers or any of the other physical markers typically relied upon to navigate a community. He was the principal GIS specialist leading the re-survey of national historic districts following Hurricane Katrina while working for FEMA in New Orleans, and also used GIS to map oil and gas pipelines for an engineering firm in Houston.

After tiring of his 45-minute, one-way commute on a 12-lane highway in Houston, he recently moved to “absolutely gorgeous” Fort Collins, Colorado, where he rides his bike to work and lives among a community of like-minded people who share his concern for the environment and are open to new ideas. In his position with Parks and Wildlife, his is responsible for mapping all of the parks in the state of Colorado.

But there is so much more to Matt than simply what he’s done and where he’s been. Let me take you back to the beginning, where we began our interview….

Do you have any idea how your parents chose Anami for you, or why they thought Montessori education made sense for you?

“Mom had an interest in alternative education because of the horrible time she had had in school. She grew up in Spartanburg, SC. She had moved there from California, where she received a very good primary education. But then she was blown away by how terrible the education system was in Spartanburg at the time. She went on a personal crusade to put me into something that could enable me to succeed as opposed to kicking me down, as she had experienced.”

We often talk about Montessori education as “preparation for life,” as opposed to simply an education. Does this make sense to you? If so, in what way has it prepared you for life?

“There is definitely a link between Montessori and who I am now—and not just Montessori, but especially Anami. My mom was into experimental types of education and the Montessori method. I had been in two Montessori schools in Charlotte before Joan’s school. I started there at age six. It had profound implications not only on my education, but on who I was, who I turned into—the path I chose in life. The huge impact was obvious when I went to public school after Anami.

“But I’m glad I went to ‘Big I’—there were 3,000 kids in the school. It was an edgy, diverse student population. It was a huge contrast to my early education, but it was complementary in a way. Montessori gave me the confidence to be independent. I am amazed at how Montessori education taught me how to teach myself. It gave me the tools to access knowledge and have a thirst for education. This is in contrast to the people I know from the public system who have been ‘taught at’ all their life. Montessori education has given me the tools to make competent decisions in life—not just about schooling or career success or technical expertise, but the strength and ability to make good moral choices.

Do you have memories of any favorite materials or lessons?

“One of the lessons that has always stuck with me, one material that I’ve always kept close, is the timeline of life. I always come back to that concept, that when you think about how small you are in the world—surrender to being such a  small little piece of this huge thing—you realize how important it is not to get too caught up in your ego, your anthropomorphic, human-centered idea that we are the masters of our environment. We are a tiny piece of our environment and we should act as such. The timeline—that little red line [at the end, representing humans]—has always stuck with me. We are just a small piece.

“Another important lesson was taking care of all the pets—having responsibilities for other living creatures.”

Matt then shared memories of (perhaps inadvertently) raising guinea pigs at home and then sharing them with the classroom. He also spoke fondly of Joan’s dogs—Haiku (Ku) and Coco.

Any particularly fond memories you’d like to share from your time in the classroom/your time at Anami?

Here, Matt shared memories of a relief trip the elementary class took to South Carolina following Hurricane Hugo. On a humorous note, he recalled when he and his classmates got stuck in the marsh on that trip. They had to take turns pulling each other out. He described it as perfect teamwork:

“One person would get stuck in the mud, then the next would help him get out, while also getting stuck himself. The line just kept going with each person helping the next until finally all were rescued. It was a lot of fun.” 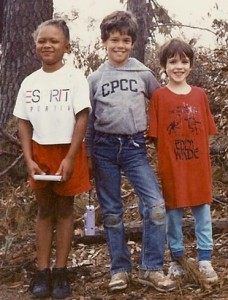 “One of the things I learned growing up is that there’s no substitute for a good foundation. My education—not just in the traditional sense of the word, but morals, internal strength, independent thinking—all that was established when I was in Joan’s school.”

Matt then went on to hint at his more mischievous doings post-Anami, those that the teen years and young adulthood sometimes bring:

“Even with all the craziness I got into, my mom still stood by me with all her love and had faith in my foundation. I’m just happy that she stuck with me and that I had all those lessons and memories to guide me back to the middle path.”

“It is all about happiness in the end. Nothing else is really important—money comes, money goes—happiness is the only thing that matters.”

After forty-five truly enjoyable minutes, I reluctantly realized it was time to let Matt finally eat his lunch. In bidding him farewell, I asked what he was going to be up to that week. In my head, I imagined him sitting under the perfect Colorado sun and smiling as he answered, “Tomorrow, I’ll be going to a bighorn sheep count, then later in the week I get to go up north to a hatchery to clip trout [a procedure to mark which hatchery the fish came from].”  Yes, that sounds like happiness to me. Thanks for sharing with us, Matt.

The Art and Science of Parenting