Maria Montessori (1870-1952), known throughout the world as the originator of the Montessori Method of Education, was the first woman in Italy to receive a medical degree. In 1902, while working with children with mental or emotional disabilities, she was inspired to design a variety of learning materials which proved very successful with these handicapped children. 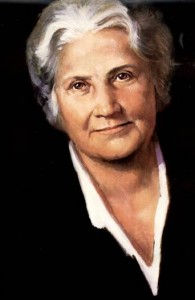 Her opportunity to have these materials used by a larger and more diverse group of children came in 1907 when she was asked to direct a pre-school project for socially disadvantaged children in the San Lorenzo district of Rome. Her Casa dei Bambini or Children’s House became world famous, and educational observers came from many different countries to watch the young children absorbed in learning with these unusual materials.

Eventually Montessori gave up her medical practice and devoted her life to training teachers in the use of her methods. Her materials and her educational philosophy spread to six continents, and many of her innovations were adapted for mainstream education.

Montessori’s ideas have flourished. Because they are based on her ingenious observations of children, they are universal in their application.

In the United States, a resurgence of interest in the Montessori Method began in 1960 and led to the establishment of thousands of new Montessori schools.

Books by Maria Montessori include: The Montessori Method, The Absorbent Mind, The Secret of Childhood and The Discovery of the Child.

“The child cannot develop if he does not have objects around him permitting him to act. Until the present, it was believed that the most effective learning took place when knowledge was passed on directly to the child by his teachers. But it is really the environment that is the best teacher. The child needs objects to act; they are like nourishment for his spirit.”

Connect with Us Online